Currently brought to you from… Istanbul!

Most Viewed Posts & Pages (of the past few days)

It Just Makes Me Happy

St. Paddy’s Day is this Saturday, and I have of course been spreading the green joy throughout the school this week, reminding the older kids about the holiday and everything they’ve learned about Ireland. The new babies aren’t capable of grasping more than “You… Korea. Me… Ireland.”, but for art class today we made little bear puppets dressed in green and shamrocks, and used them to practice saying “My name is Paddy the bear!” and “Happy St. Patrick’s Day!”. 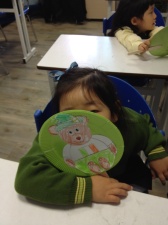 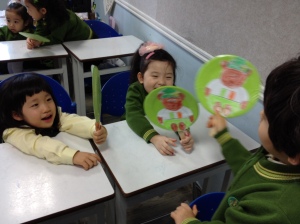 Everyone had fun, and the kids went home proudly clutching their new Irish friends.

As I was sweeping the paper cuttings off the floor and getting organised for my elementary classes, one of my Korean colleagues wandered in. “Hey, how could I insult someone in Irish?” she asked casually. I shrugged. “I don’t speak Irish.” She shook her head – “No, I just mean colloquial language. Teach me some rude slang from your country.” 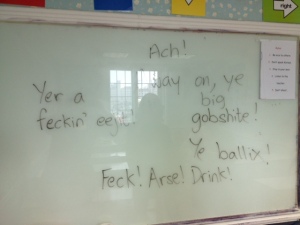 I wrote a few helpful words and phrases on the board, and proceeded to fall about laughing as she practiced saying “Yer a feckin’ eejit!”. The noise brought two more colleagues to see what was causing such hilarity, and before long they were all competing to see who could speak the best “Irish”.

I like to think that, in my own special way, I have brought a little piece of Irish culture to my Korean colleagues. This is what teaching is all about! ;)

In Korea, there’s a great deal of importance placed on being first.

Perhaps that’s why I have all the constant issues that I do with my students yelling “Finished! I’m done!”, and why they all became so obsessed with the story that taught them the phrase “I’m first, you’re next, and you’re last”. It’s why I spend time every single day resolving scuffles at the classroom door when it’s time to line up.

But the classroom is just the beginning. It’s where the Must Be First mentality takes root and becomes a driving force in the mind of the Korean child, who will one day become one of those expressionless people who stand nose-to-door in the subway or the lift (elevator, whatever).

I could so easily have hundreds and hundreds of photos to illustrate this bizarre phenomenon, as I see it every single day of my life in the RoK. I am, however, entirely without the brazen self-confidence it would take to start snapping pictures of sullen-faced strangers in subway cars and crowded lifts, so you’ll just have to take my word for it and try to imagine the scenes I describe. Oh, with the help of this cartoon from the ever-reliable Roketship: 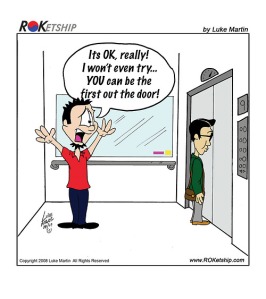 Honestly, I keep casting my mind back to my pre-Korea days in an attempt to convince myself that perhaps it’s like this everywhere… maybe everyone in the world does this thing that occasionally irks me so much that I want to shake them and scream “Why?!!!! WHY?!!!!!! For the love of sanity and patience, WHYYYYYYYYY?!!!”. But you know what? I don’t think they do. I’m fairly certain that back home and in numerous other countries I’ve visited, the normal thing to do when waiting for a subway or lift door to open is to stand back (at least a foot or two, space permitting) and, y’know, just wait. That way, you will not be startled by a sudden surge of people from the other side, for example, or look totally insane to the one other person in the lift with room for 20 more.

I cannot emphasise enough how extreme they are about this. Picture a lift that is big and roomy, and you’re getting into it with one random stranger. If you are anything like me, you will instinctively move to one of the three sides containing no doors, thus keeping the entrance clear for others, and allowing your lift companion to exit before you if necessary. However – I guarantee you!! – if that random stranger is Korean, they will just barely step inside the lift and then immediately turn around, so that when the doors slide shut, they are in very real danger of it neatly clipping off their nose. Then they will shuffle forward as much as they can, to close the 5mm gap they may unwittingly have left between said nose and the now-closed doors. Safely in position, they will then stand there in silence, nose pressed firmly against doors, in blank, stony-faced, unblinking silence. I am generally lounging against the back wall at this point, staring incredulously at them and resisting the urge to rugby-tackle them to the floor every time the doors open and they refuse to move to let others in, resulting in the usual pushing and shoving until the doors close again and now there’s a whole line of them standing nose-to-door, and me with enough space around me to lie down and take a nice nap.

It MAKES. NO. SENSE.

I mean, not only does it look totally, mind-bogglingly insane to observers like myself, but it is rude! It is pointless! It is completely unnecessary and serves absolutely no purpose!

I don’t know why it drives me so utterly nuts, but it really, really does.

Which is why, when I saw this fantastic video today, I laughed like a lunatic and instantly wanted nothing more out of life than to perform this experiment here in Korea.

I cannot allow myself to truly believe that it would work, nor do I think I’d be capable of controlling my hysterical laughter if it did. But am I going to gather together a posse of friends this weekend and give it a try anyway?!

Try and stop me…

What went before: the Coffee Helps archives